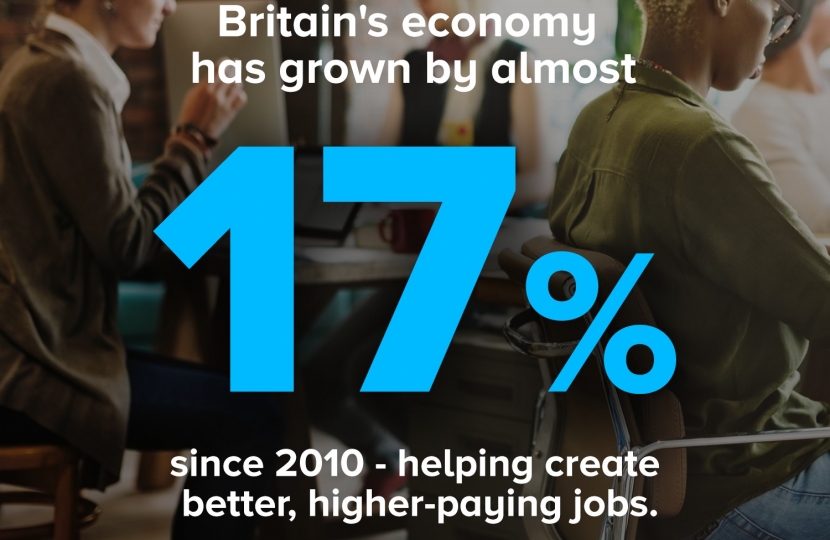 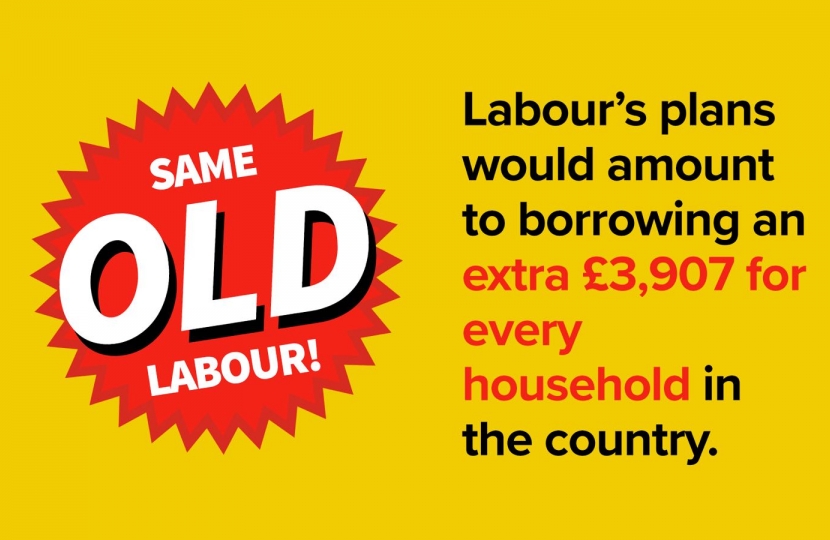 The UK has come a long way over the last eight years, with the economy growing strongly, unemployment at a near-record low, the deficit down and more investment in public services like the NHS.

The Conservative government is taking a balanced approach as we build an economy that works for everyone. We have invested over £60 billion since Autumn Statement 2016, in public services and in building the infrastructure for the future, while continuing to cut tax for millions of working families and seeing debt start its first sustained fall in a generation – a turning point in our recovery from Labour’s mess.

The Conservatives are creating a country that works for everyone: getting control of the public finances whilst investing in our public services; investing in our economy to create better, higher-paying jobs; and supporting families with the cost of living.

What the indpendent OBR has said about the economy and public finances:

·         The economy is set to grow more strongly than previously thought. The OBR today increased their estimate for growth in 2017 from 1.5 to 1.7 per cent, and forecast stronger growth of 1.5 per cent for 2018. Our economy has now grown for eight consecutive years, and is nearly 17 per cent bigger than it was in 2010.

·         We’re at a turning point; debt is beginning to fall – the first sustained fall in debt in 17 years.  We’ve reduced our deficit by £108 billion over the last seven years thanks to the hard work of the British people; while since Labour’s manifesto was published last year, they’ve committed to spending £106 billion – blowing away eight years of hard work in just nine months.

·         Manufacturing has grown for the longest consecutive period in 50 years, with high-tech manufacturing sectors growing strongly since 2010.

The Conservatives Party's priorities for the UK:

Investing to support our world-class public services. Due to the decisions this Government has made, the IFS found that we have the highest level of sustained investment in 40 years. Since Autumn Statement 2016, we’ve invested £60 billion in our public services and invested in Britain’s long-term future, while continuing to cut tax for working people.

2)      Investing in our economy to create better, higher-paying jobs

Investing in people.  We’re building a country that works for everyone, one which is ready to meet the challenges of the future head on.  It's vital that people have the right skills to thrive in a modern dynamic economy.  That’s why we’ve launched a National Retraining Partnership between government, industry and unions to equip workers with the skills they need to succeed as we make the UK a world leader in new technologies.

Investing in infrastructure.  Since 2010, we’ve provided over half a trillion pounds in capital investment. We’re embarking on the biggest rail modernisation programme since Victorian times and major infrastructure projects like Crossrail and the Merseyside Bridge.  While the IFS have said that our plans will see public investment increase to the highest sustained levels in 40 years by the end of the Parliament.

Making a success of Brexit.  At the Autumn Budget 2017, we’ve set aside £3 billion over 2 years so that we’re ready for Brexit.  Today, we’re allocating £1.5 billion to Devolved Administrations and Departments to ensure that we are prepared for any possible outcome of the negotiations.

Building a modern economy that creates better higher-paying jobs. The only way to improve living standards, and deliver the high-skilled, high-wage jobs of the future is to boost productivity so that we can build an economy fit for the future.  The Autumn Budget extended the National Productivity Investment Fund to £31 billion, and committed to raising Research and Development support to the highest level in 30 years.

3)      Continuing to support families with the cost of living

Boosting wages for the lowest paid.  It was this Conservative Party that introduced the new National Living Wage – delivering the fastest pay rise for lower earners in 20 years.  In April this year, we will increase it again leaving a full time worker on the National Living Wage over £2,000 a year better off since its introduction.  Over 2 million people are expected to benefit from the increases to National Living Wage and National Minimum Wage in April, with under 25 year olds and Apprentices seeing the largest increases in 10 years.

Helping families keep more of what they earn.  We’ve raised the personal allowance so that, this April, the 31 million people will see their income tax bill cut by over £1,000 since 2010 – keeping taxes low for ordinary families.  While we’ve taken 4 million of the lowest paid out of paying income tax altogether. We believe in taxes that are low but taxes that are paid.

Supporting consumers, while ensuring a strong safety net if someone slips into debt.  We are helping consumers deal with their debts through increasing financial capability.  We fundamentally reformed consumer credit regulation in 2014, giving the FCA robust regulatory powers, while the new Single Financial Guidance Body will give consumers free advice and guidance on all money matters.